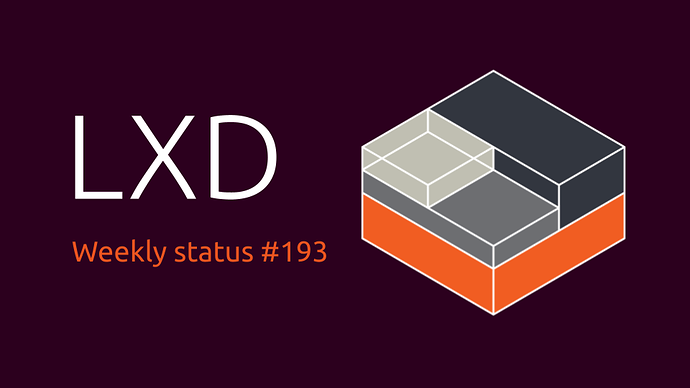 In addition to the more flexible snapshot schedule feature described in the 4.13 release notes, there were also a number of bug fixes and improvements made in the past week.

The network firewall subsystem (which is responsible for abstracting the firewall drivers for nftables and xtables used with bridge networks) has been seeing some modifications in order to accommodate the forthcoming ACL support. Firstly the xtables driver has been modified to use a per-network specific chain for NIC level filtering rules. This achieves two benefits; it ensures that the NIC filtering rules are not affected by rule changes in the main xtables chains (which can happen when LXD is reloaded and the network level base rules are re-applied), it also reduces the amount of rules that have to be evaluated as only the NIC rules for the relevant network are evaluated.

The nftables firewall driver has also seen some improvements. We have moved to using a combined inet nftables family rather than separate ip and ip6 family tables. This simplifies LXD rule management, and allows for rule reduction by not needing to add IP address agnostic rules to both the ip and ip6 tables.

There have also been improvements in the image replication logic used with LXD clusters to reduce the amount of traffic caused immediately after joining a new member to a cluster.

An issue that was preventing copying a VM snapshot to another LXD remote has been fixed in the lxc client.

A storage bug that was preventing import of optimized ZFS VM backups has been fixed.

Also related to VMs, we have restricted the use of Qemu virtiofs to Intel architectures only, due to instabilities on ARM architectures.

This past week has seen continued fixes from oss-fuzz, as well as improved hardening of the config parser, and a fix for handling spaces in $PATH variable in image templates.

A fix for the CentOS 8 Stream public GPG key has been applied.

Several fixes have been applied in the past week to address scalability and inconsistent state issues.