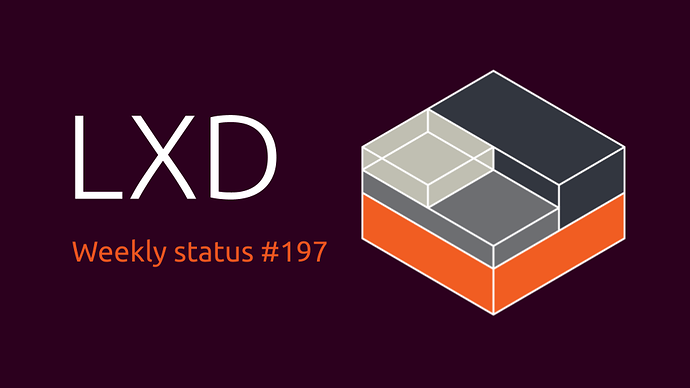 The highlight of the past week has been the bumper number of releases we’ve had. Please click on each one to see their specific release notes. Included in the 4.14 release and added in the last week was the new cluster join tokens feature.
This allows you to add a new member to a cluster by running lxc cluster add <new member name> from an existing cluster member. This will then display a one-time join token that can be copied and pasted into the relevant question during lxd init on the new joining member.

This feature provides the following benefits:

We have also added the ability to set a free-text description on each cluster member.

Projects have gained support for restricting whether backups and snapshots can occur using the following new settings:

This is useful as backups and snapshots can be expensive from a load and resource usage perspective, so it may be preferred to prevent restricted users from being able to perform these operations on instances and volumes within a project.

You may remember that recently we switched to using per-cluster-member certificates (included in 4.14) for intra-cluster communication. This change required the introduction of a type field for trusted certificates in the LXD trust store. We are now exposing that field, as well as the specified certificate name, in the output of lxc config trust list so that is is easier to differentiate server certificates from client certificates.

On the VM front, an issue with the recent switch to using QMP’s query-cpus-fast command has been fixed, along with an improvement to now respect the LXD_OVNMF_PATH environment variable when using AppArmor.

There were several minor issues with the new persistent warnings feature around validation and user experience that have been fixed.

The lxc-monitor log feature has now been removed as it is effectively unused and was causing log files to be needlessly created and endlessly written to.

Some compilations warnings when compiling on Fedora 34 have been fixed. There were also some fixes for Arch as well.

A regression in root pinning on ZFS has also been fixed.