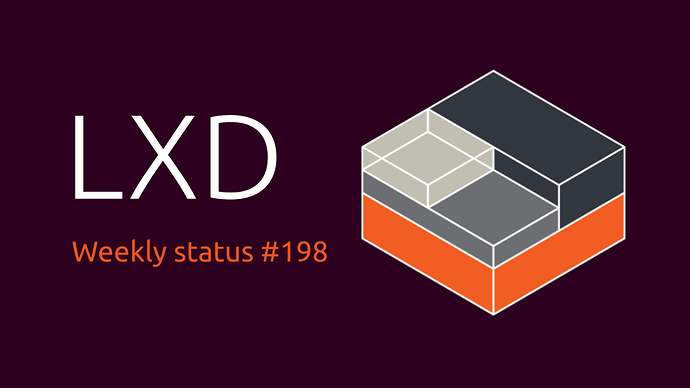 The past week has seen a focus on cluster heartbeat stability improvements in LXD and Dqlite, the continuation of idmapped mount support and fuzzing testing in LXC, and the addition of AlmaLinux support in Distrobuilder.

This past week continues the work on improving the reliability and predictability of the LXD cluster heartbeat system. A fairly recent change a few weeks ago saw the removal of several code paths that were unintentionally generating cluster wide heartbeats each time an operation was run (such as lxc cluster ls) to get fresh state. This was undesirable as it would cause unexpected load on the cluster. However after the change we found that some of our automated tests were intermittently failing during cluster member handover testing. The resulting deep-dive to fix these tests resulted in the following changes to LXD cluster heartbeats:

Also cluster related, you can now specify the cluster_certificate_path setting in the cluster pre-seed information, allowing the certificate to be read from a file, rather than requiring to be embedded inside the pre-seed info.

The ability to control how long LXD waits whe performing a clean shutdown has been added via the core.shutdown_timeout setting.

A fix for an issue that prevented container deletion after a failed start due to the shiftfs mounts being left over has been added.

A regression in the bridged network VXLAN tunnel setup that was introduced with the new ip package has been fixed.

The /dev/lxd device that is available inside containers now exposes the hostname of the cluster member that it is running on in the Location field. This will be particularly useful for the guests to be able to pass that to further clusters (like Kubernetes) to avoid putting all of the control services on the same physical host potentially leading to broken high availability.

On the storage front, the ceph driver has been updated to always return volume usage estimates, even if the instance isn’t mounted.

On the VM front, a fix for the LXD_OVMF_PATH setting when it points to a symlink has been fixed so that AppArmor correctly uses the deferenced path.

Also on the VM front, initial work has been added to use the QMP protocol to add NIC devices. This is part of a larger project to move away from using the Qemu config file, as the Qemu project have soft deprecated it. Using QMP to add the NIC devices was the first step towards this and also lays the ground work for being able to hotplug NIC devices into a running VM. However the work to using QMP on pre-boot to add NICs is looking in doubt as it has been found that Qemu doesn’t apparently respect the bootindex setting when NICs are added via QMP (even if done before the VM is actually started). Hopefully we can find a resolution for this otherwise we will need to use a two different methods to add NICs at boot time and at hotplug time.

A couple of regressions have been fixed and improvements to idmapped mount support have been added.

Option parsing has been reworked to align with how LXC handles this.

Initial support for AlmaLinux has been added.

Added a fix that skips pre-vote logic when disrupt_leader is set. Without this fix a leadership transfer could fail when a HeartBeat arrives at a node that has just become Candidate as the result of a raft_transfer.