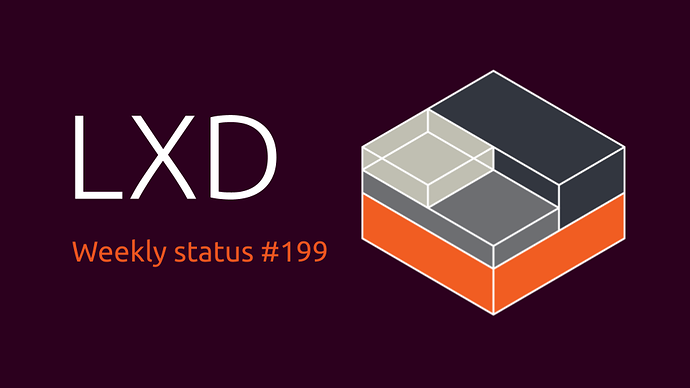 The past week we have been working on adding support for QEMU 6.0 to LXD, as part of this we are moving some of the device management from config based to QMP based, which will also aid hotplugging in the future. Work also continued in LXC to add idmapped mount support.

Continuing on from last week’s work to move VM NIC setup up to use QEMU’s QMP protocol (in order to have a single approach to support both boot-time and hot-plug NICs) there have been two regressions fixed; firstly boot.priority support wasn’t working for NICs added via QMP, and this required a fix in LXD to workaround a bug in QEMU that meant that the boot order was not refreshed in the EFI firmware until the VM was reset. Secondly, S90x support was broken because it does not support multifunction devices and as even adding multifunction=off was sufficient to prevent VMs being started on that architecture. Additionally VM macvlan NIC devices are now fully configured using QMP by utilising the SendFile command to pass the interface’s TAP file descriptor to QEMU.

On the cluster side, the recently added join token feature had some issues fixed and additional improvements added such that if there is an existing join token for a new member and the lxc cluster add <member> command is run again for the same new member, then the old token(s) are removed so that there is only ever a maximum of 1 outstanding join token for each new member.

An issue that was leaking go routines and operations when lxc exec requests were being forwarded between cluster members has been fixed, and in cluster image distribution the scenarios in which a transfer token operation is required as been reduced.

On the networking side there have been two user experience improvements; firstly we now detect and prevent using an existing host interface that has existing IP(s) configured on it as the parent for physical or OVN networks. This prevents accidentally using an interface that is in-use that would cause network interruption when the interface is either connected to an OVS bridge or moved into an instance. Secondly, we now detect if the dnsmasq process used with managed bridge networks has exited prematurely (perhaps due to a conflicting process listening on the ports it needs) and a warning is logged in LXD’s log.

Finally an issue that was intermittently causing LXD to crash when running lxc ls with ephemeral instances has been fixed.

Distrobuilder now avoids using overlayfs on XFS filesystems and instead uses rsync as a fallback.