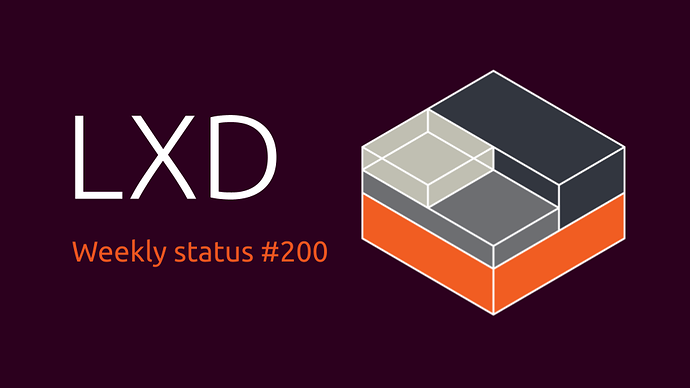 This past week has seen the addition of three new RHEL derived distributions in distrobuilder, several improvements and bug fixes in LXD, performance improvements in dqlite snapshotting and nftables firewall support in lxc-net.

The lxc monitor --pretty command now supports lifecycle events (as it previously only supported --logging type events). In addition to that, we now also display the requester as part of the lifecycle event.

The persistent warnings feature has had two new warning types added to it; AppArmor disabled and cluster time skew.

An issue that was preventing VMs being started when using additional disks attached with readonly=true has been fixed. The issue was that the LXD applied AppArmor profile was preventing QEMU from accessing the disk share directly. For writeable disks shared to the VM guest using 9p we use the virtfs-proxy-helper process to allow QEMU to access host directories outside of the main AppArmor profile. However originally when adding VM disk device support we found a bug in QEMU that meant when using virtfs-proxy-helper that the readonly property was not respected, so instead we got QEMU to access these directories directly for these types of disk. Subsequently the AppArmor profile was introduced which broken this behaviour. However that QEMU issue has since been fixed and we can now use virtfs-proxy-helper for both writeable and readonly disks. During the process of fixing this it was also found that when using the faster virtio-fs protocol to share disks into the VM guest that it doesn’t support read-only mode at all. This has now also been fixed by getting LXD to set up a read-only bind mount of the source directory on the host before sharing that with virtfs-proxy-helper (for 9p) and virtiofsd (for virtio-fs) respectively. This means we now take the “belt and braces” approach to enforcing readonly access for readonly disk shares, and do not only rely on the QEMU provided security features.

Also VM disk related, an issue that was causing the SCSI-ID (that is used to derive the disk device name inside the guest, e.g. /dev/sdb) of attached disk devices to fluctuate between boots has been fixed. The issue was caused by the use of the generated boot index to derive the SCSI-ID. This boot index number was changing for disk devices that did not explicitly specify a boot.priority setting. We now use a stable sorted list of devices when generating the boot index so that this doesn’t fluctuate any more.

A recently added safety feature that prevented using a host side network interface as the physical uplink parent for an OVN network if it had any IPs configured on it has been partially relaxed. We now only prevent this from happening if the parent interface is not a bridge. This is because it is valid to use a bridge interface (native or OVS) as the physical parent for an OVN network and because in this case the OVN network is connected to it via a bridge port it doesn’t matter if the bridge interface itself has IPs configured on it as OVN won’t disrupt the communication on that bridge.

The recently added cluster join token feature has had a small usability improvement, we now output the token from lxc cluster add on a new line so that it is easily selectable (to copy) using a triple-click.

The lxc-net script now supports the nftables firewall. Also some build errors on CentOS 7 have been fixed.

Support has been added for both Rocky Linux, Springdale Linux and Amazon Linux distributions, which are all RHEL derived rebuilds.

A generic rootfs HTTP downloader called rootfs-http has been added to allow downloading premade rootfs images as the basis of distrobuilder built images.

A new --disable-overlay flag has been added that disables the use of overlayfs, and instead uses rsync for moving files around. Although overlayfs is faster, it causes issues on some setups (such as ZFS, which we already detect and automatically disable overlayfs use for) and this new flag allows users to rule that out as a cause of any issues they may be experiencing.

Snapshot compression with lz4 has been introduced to avoid an issue that was occurring when a dqlite database was receiving lots of writes and had slow disk I/O causing periodic hangs for several seconds whilst the snapshot was written to disk. As well as compressing the snapshot, there’s an additional data integrity check when decompressing the compressed snapshot that in practice should allow dqlite to detect storage corruption. Members running compression are compatible with members running without compression, as the data over the wire hasn’t changed, this should deal with issues where cluster members are only updated one at a time. The compressed snapshot files are regular lz4 files (without the .lz4 extension though) that can be decompressed with the lz4 cli tool.

A new optional argument has been added to the .dump command to allow specifying which database to dump.