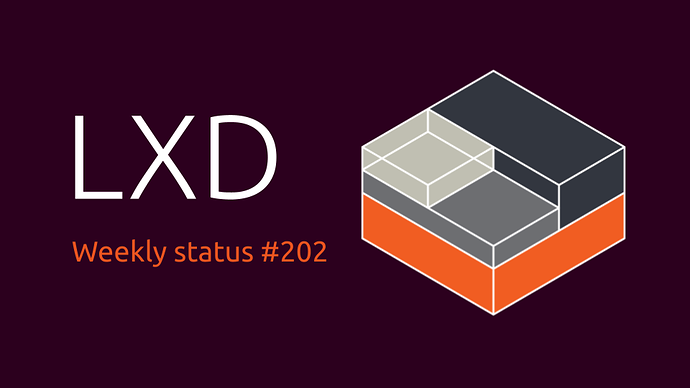 This past week has mostly been a bug fix and improvement week, however Dqlite 1.8.0 also got a release with new snapshot control functionality.

The LXD latest/stable and 4.0/stable snaps are also going to be moving to the core20 base snap package this week which means the i386 variant will no longer receive updates. Please see

LXD snap transitioning to core20 and losing i386 support News

Hello, This is a quick announcement that we have begun the transition of the LXD snap from core18 (Ubuntu 18.04) over to core20 (Ubuntu 20.04). Currently this only affects the latest/edge channel, the next stage will be the setup of latest/beta which will match latest/candidate but use a core20 base and then after a few more weeks of testing, we’ll eventually flip latest/candidate and latest/stable over. Then again a few more weeks after that and we’ll have the 4.0/candidate and 4.0/stable ch…

With the advent of cluster join tokens (which are more secure than using a single shared trust password to join members to a cluster), now when setting up a new LXD cluster using lxd init the question that asks “Setup password authentication on the cluster?” has had its default value changed from “yes” to “no”, so that we encourage users to use join tokens going forward.

The persistent warning feature has had several new warning scenarios added to it:

There have been three instance import/export related bugs fixed in the past week:

There has also been a fix to better detect the new idmapped mount support in liblxc. Some versions of liblxc come with support for idmapped rootfs but do not support idmapped mount entries. LXD will now only support those LXC versions that have full support.

To aid packagers of LXD there is a new build Makefile target that just performs the build and doesn’t attempt to pull any dependencies. It is then up to the packager to fulfil the dependencies however they see fit before running the build.

LXC will now actually report an error when failing to wire AppArmor.
An issue that was causing incorrect return values from lxc-autostart due to a miscalculated failed count has been fixed.
An API extension has been added so that LXD can detect full idmapped mount support.

We have added beta and rc support for AlmaLinux.
Work has continued on improving the systemd generator to fix networking issues in some images and to work towards ensuring that all our relevant images have a clean systemd start up process with no failed units.

Dqlite 1.8.0 has been released with support for controlling node snapshot functionality. See the release notes for more details.